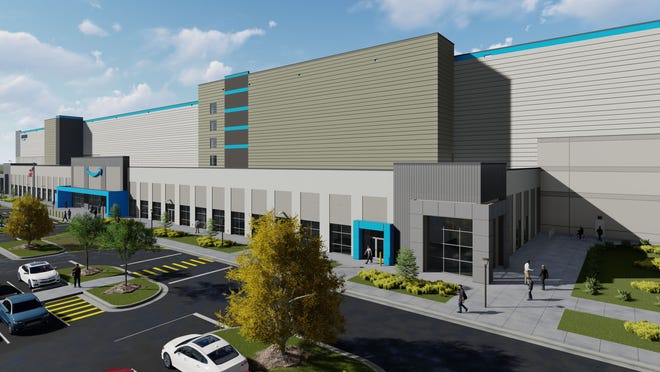 A massive distribution facility under construction in Mt. Juliet being built for Amazon that will bring 1,000 new jobs was formally announced Friday by the Tennessee Department of Economic and Community Development.

The facility is projected to have 3.52 million square feet of warehouse space and 80,000 square feet of office space on land on land off Golden Bear Gateway, East Division and Athlete’s Way North, according to plans submitted during the approval process.

The size of the facility was listed at approximately 855,000 square feet at Friday’s electronic announcement because of COVID-19.

Plans submitted to Mt. Juliet during the approval process listed the facility at 3.6 million square feet with five stories and a height of 92 feet.

Mt. Juliet Mayor Ed Hagerty referred to the facility’s smaller size announced Friday as the approximate footprint for one level of the project.

The Mt. Juliet distribution center will be the second Amazon fulfillment center in Tennessee to use “innovative” robotics technology, according to a news release.

Employees will pick, pack and ship smaller customer items, such as books, electronics and consumer goods.

No tax incentives were immediately announced.

“A significant investment in a county that has certainly had its share of challenges this year between tornadoes and COVID,” Gov. Bill Lee said. “We are very grateful for this investment that Amazon has made in our community.”

Mt. Juliet approved the project in October 2019. Multiple sources had confirmed the project was linked to Amazon during the approval process.

The Mt. Juliet facility will be Amazon’s seventh fulfillment center in Tennessee, including one in Lebanon.

Road improvements, greenway trail and sewer connection are among conditions Mt. Juliet has required for the development during the approval process.

The target date to open is now late 2021 according to an Amazon representative at Friday’s announcement.

The project is being developed by Panattoni Development Company, Inc.

To learn more about working at an Amazon fulfillment center, visit www.amazondelivers.jobs.

Reach Andy Humbles at ahumbles@tennessean.com or 615-726-5939 and on Twitter @ AndyHumbles.